The spatial arrangements of atoms in molecules define stereochemistry. The stereochemical features of single atoms, double bonds, rings, symmetry operations as well as the conventional nomenclature describing them are presented with examples.

Stereochemistry is the study of the spatial arrangements of atoms in molecules. This arrangement affects the way it reacts in chemical reactions and its biological and physical properties. 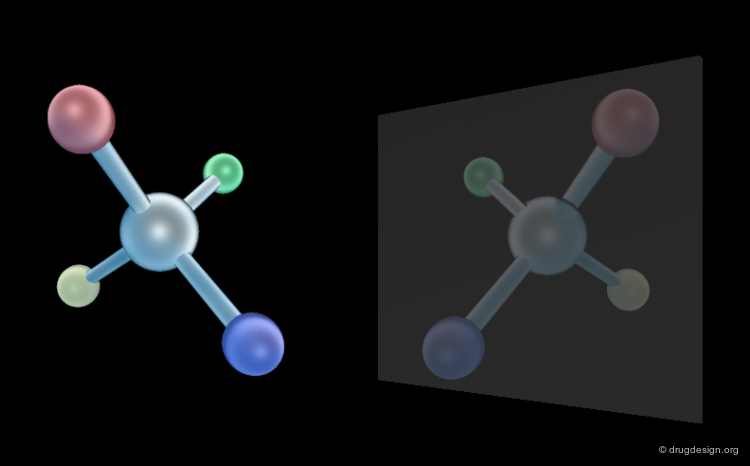 The increase of the size of the bonded atoms will increase the bond length. 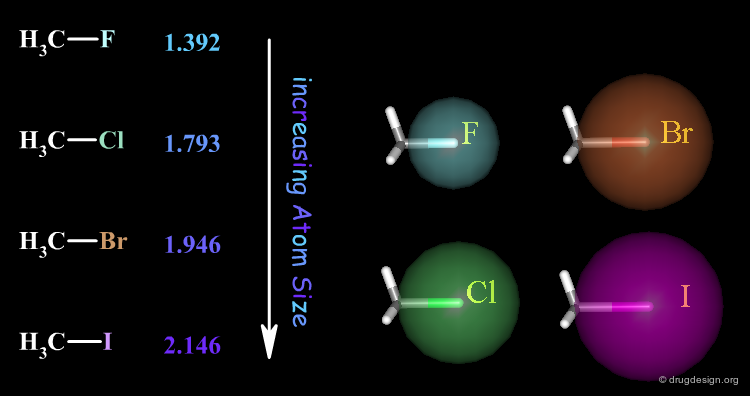 Increasing the electronegativity of the atoms will decrease the bond length. 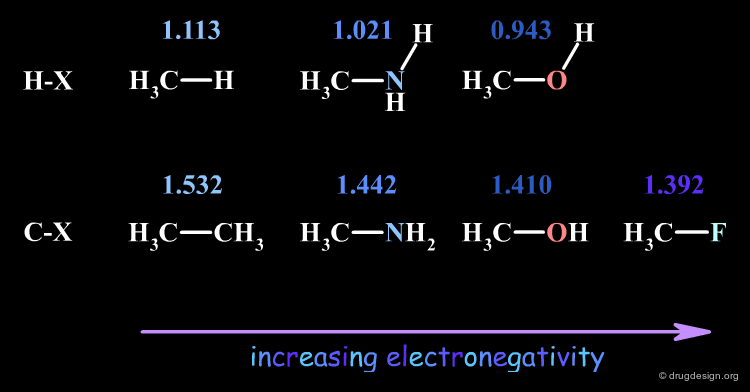 Increasing the s-character (hybridization) will decrease the bond length. 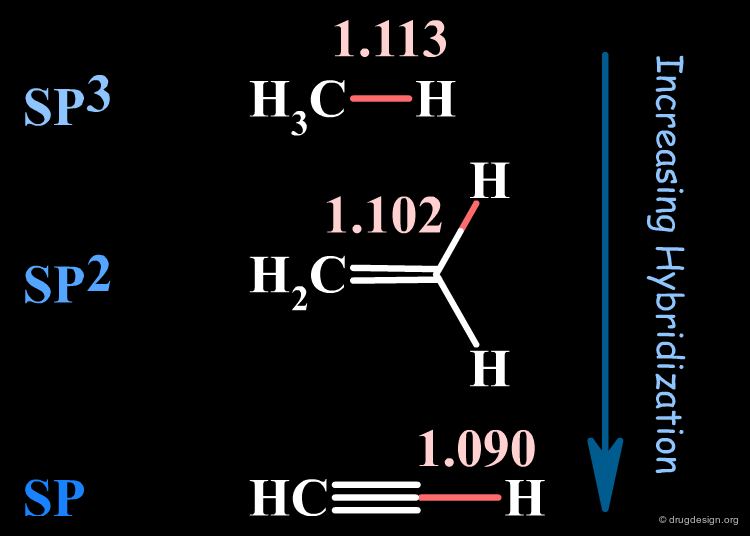 Two successive bonds define a bond angle. The value of the bond angle depends on the nature and the hybridization of the atoms. Increasing the s-character of the central atom increases the bond angle. 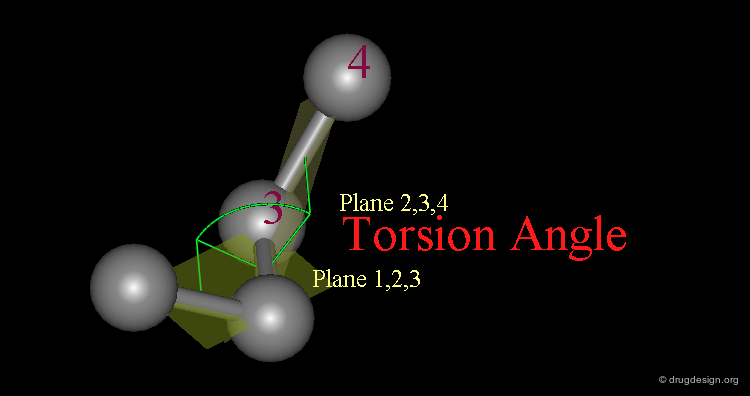 A +/- sign is assigned to the torsion angles: the back bond is kept fixed and the front bond is rotated so that it can superimposed on the fixed one. The torsion angle is positive if this rotation is clockwise and negative if it is counterclockwise. 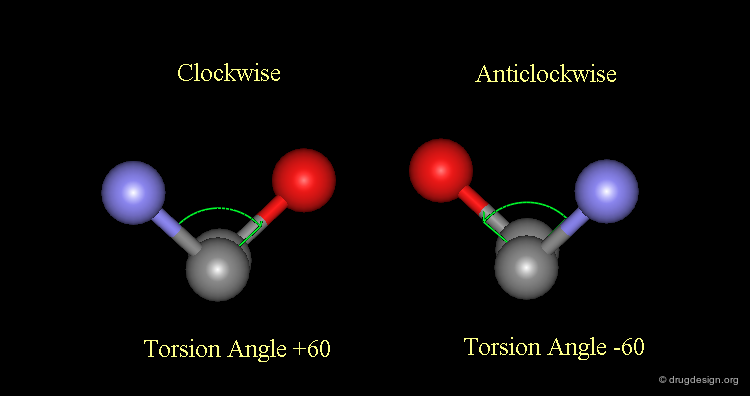 Local geometrical features in a molecule are well described with the numerical values of selected torsion angles.

Several geometries are assigned to a torsion angle with a central sp3-sp3 bond. In a staggered conformation the ligands can be in a (+) or (-) synclinal (+60o, -60o) or antiperiplanar (180o) orientation; whereas in an eclipsed form the ligands can be in a synperiplanar (0o) or a (+) or (-) anticlinal (+120o, -120o) orientation (click on Newman projections).

For torsion angles with a central sp2-sp3 bond, the favored conformers are geometries where a Σ bond of the sp3 atom is eclipsed with the π bond of the sp2 atom; this corresponds to six different geometries. (In this example the F-C-C-N torsion angle is rotated counterclockwise).

Chirality is a geometrical property of a rigid object when it cannot be superimposed on its mirror image; there are no symmetrical elements in the object (such as mirror plane or inversion center). A carbon atom holding four different ligands is a chiral center.

The following molecule has a carbon atom with four different ligands: hydrogen, amino, carboxyl and benzyl groups. The carbon is chiral and the molecule cannot be superimposed on its mirror image.

In this example we have a chiral carbon atom (bearing the methyl group) in a cyclic system. 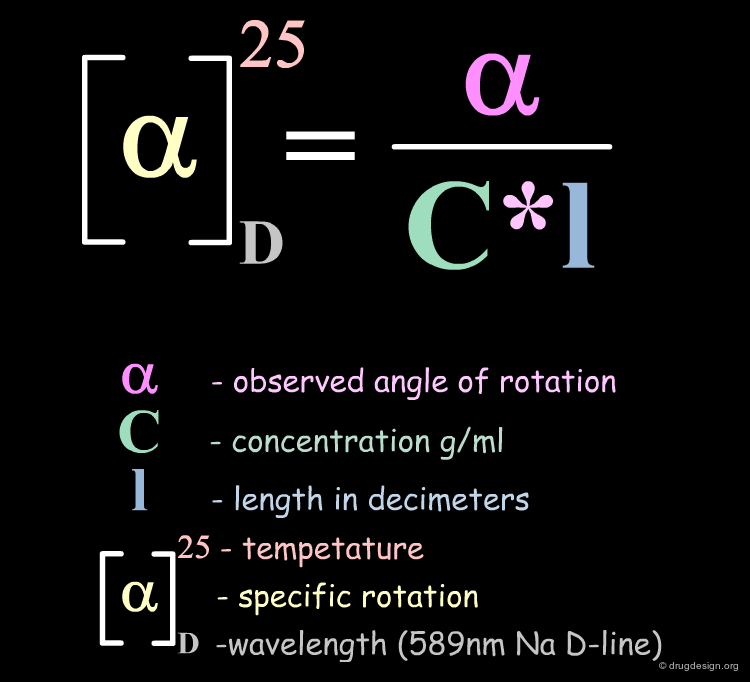 An atom with four different ligands is chiral. Its absolute configuration can be assigned by the R/S Cahn-Ingold-Prelog method as follows: (1) assign priorities to the ligands from 1 (highest priority) to 4 (lowest priority); (2) rotate the molecule so that ligand number 4 is in the back; (3) if the direction for the numbers 1 to 3 is clockwise, assign R (rectus, RIGHT), if counterclockwise, assign S (sinister, LEFT).

According to the Cahn-Ingold-Prelog rules the priority order is as indicated below: the higher the atomic number, the highest priority is assigned. 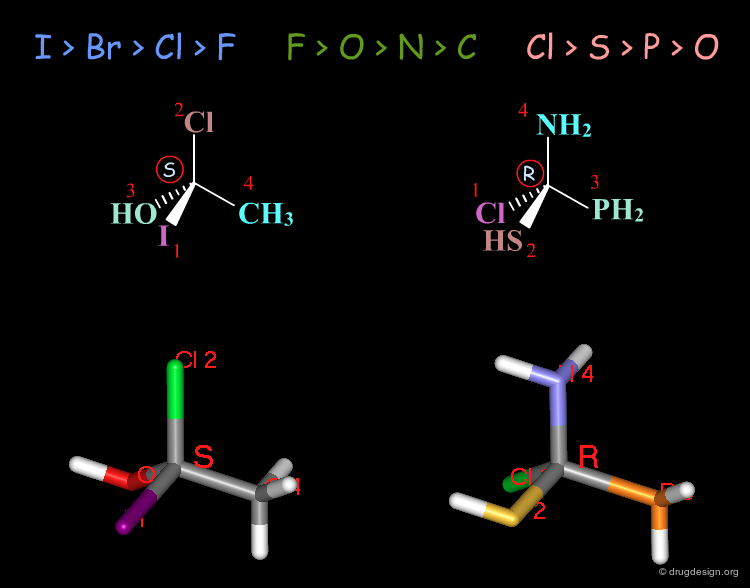 If two atoms or more are found to be the same, their attached atoms are then considered, until a difference is found.

Double and triple bonds are assigned using a convention considering the functional group with the multiple bond to be equivalent to the same number of single-bonded atoms. For the C=O bond for example, the carbon-oxygen double bond is equivalent to the carbon atom being bonded twice to the oxygen atom; however, the duplicate ones (in parentheses in the views below) will be treated as "phantom" atoms. 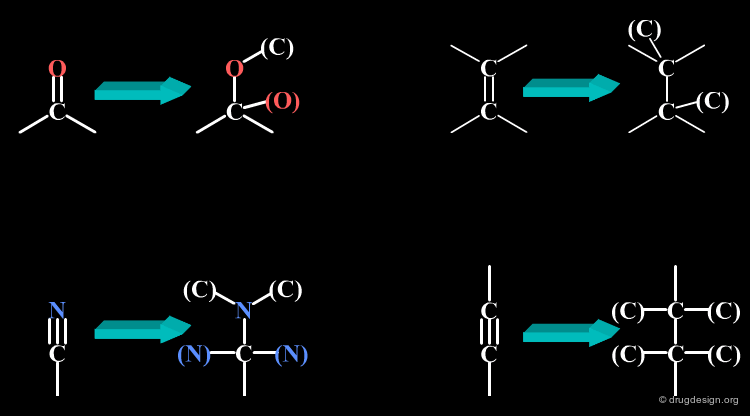 For different isotopes of the same atom, the highest priority will be assigned to the isotope with the higher atomic mass. 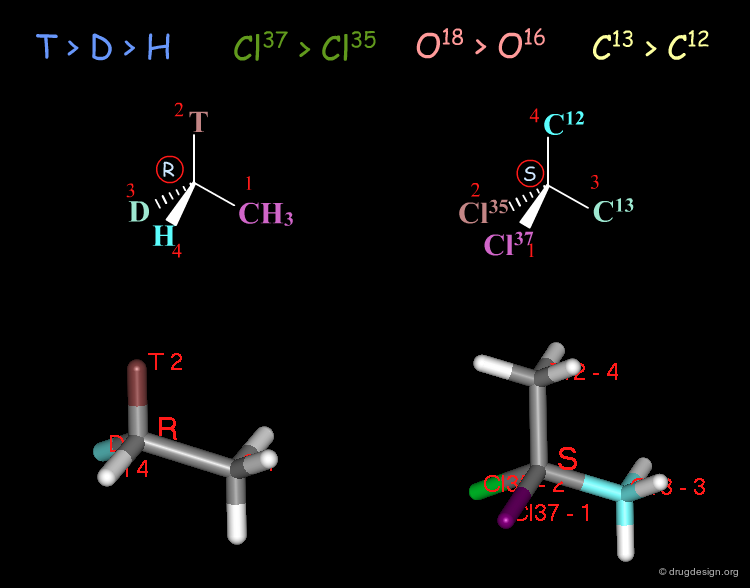 For cis and trans double bonds, the convention is to assign the higher hierarchy to the olefin with ligands being in the same side (cis). 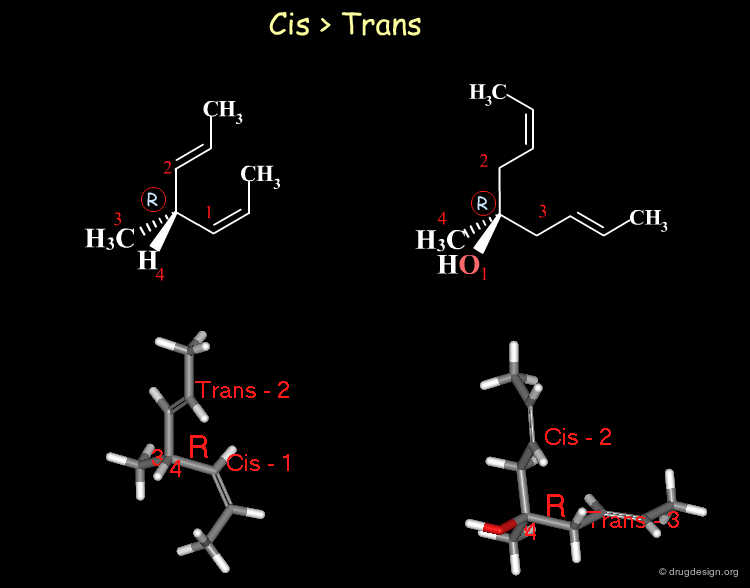 Below is shown the 2D formula of Levodopa and let us assign the stereochemistry of the molecule. Following the Cahn-Ingold-Prelog rules the priorities assigned to the atoms connected to the chiral carbon are: 1 for the nitrogen, 2 for the carboxyl, 3 for the benzyl and 4 for the hydrogen atom. This levodopa compound is therefore with the S stereochemistry.

Here is the structure of Epinephrine. The priorities assigned to the atoms connected to the chiral atom are: 1 for the oxygen, 2 for the carbon attached to the nitrogen, 3 for the aromatic ring and 4 for the hydrogen atom. The stereochemistry of this compound is R.

Menthol is a molecule with three chiral centers. The carbon atoms of the methyl and the hydroxyl groups have the R stereochemistry, whereas the carbon atom of the isopropyl is S.

Captopril has two chiral carbon atoms with the S stereochemistry according to the Cahn-Ingold-Prelog rules.

In the Newman projection the molecule is viewed along the axis of a rotatable bond, generally a C-C Σ bond. The front and back groups are connected differently to the central atoms: the lines are drawn to the center of the circle for the front atom and to the periphery of the circle for the rear atom. Newman projections are useful in describing the conformation of a molecule.

The Fischer projection is a flat stick drawing of the molecule which preserves information about chirality. The bonds of the carbon skeleton are shown vertical and other bonds are horizontal. The 3D structure can be reconstructed in the mind by imagining the vertical bonds to be below or behind the projection plane and horizontal bonds above or in front of that plane.

If more than one atom are chiral, then the Fischer projection can be used to describe their respective stereochemistries. In the example represented below the molecule contains two chiral carbon atoms.

The following alanine amino acid molecule has the amino group on the right, therefore it corresponds to D-alanine.

Here, the amino group is on the left, the structure corresponds to L-alanine.

Special descriptors are used for acyclic structures having two stereo-chemical centers. It uses the Fischer projections together with the R/S stereo-chemistries of the individual chiral centers. If the stucture is RR or SS (like) then the whole is named 'threo', whereas for SR or RS (unlike) it is called 'erythro'.

In the following molecule the two chiral centers are both S, therefore this isomer is threo.

In the following molecule one chiral center is R and the other S, this isomer is erythro.

Chirality does not have to be associated only with sp3 carbon atoms. In the following pages we present different types of chiral molecules. In the example shown below we have a molecule with a quaternary nitrogen with two possible enantiomers: R and S.

Phosphorous atoms can be chiral, in this case the lone pair is assigned with the lowest priority as the 4th ligand, and we have two possible enantiomers.

A molecule is chiral if it cannot be superimposed on its mirror image. This situation occurs with allene compounds that exist as enantiomers. The two isomers are called "plus" (+) or "minus" (-) based on the following convention: ligands with the higher rank are identified on both ends of the allenic fragment and the molecule is viewed along the allenic direction. If the higher ranked ligands appear clockwise the allene is assigned with the (+) notation, and if they appear counterclockwise the molecule will be assigned (-).

A similar situation is found in biphenyl compounds. For steric reasons the interconversion from one isomer to the other may be impossible at room temperature (ortho substituted analogs). A convention similar to the one presented for allenic molecules is used for describing the stereochemistry of biphenyl structures, with the notation (+) or (-) depending on the clockwise or counterclockwise location of the ligands.

A molecular propeller is another example of chiral moiety. A simple case is presented here where the propeller can rotate either clockwise or counterclockwise; corresponding to the "plus" (+) and "minus" (-) convention, respectively.

A helix can also represent a molecular structure containing chirality. The turn of the helix can be either right or left, in which cases the assignment will be designated either "plus" or "minus".

The cis/trans nomenclature describes the geometrical relationship between two ligands attached to two atoms that are either connected by a double bond or is part of a ring. The moiety is called 'cis' when the two ligands lie on the same side of the half plane that starts at the bond concerned and 'trans' when they are on opposite sides.

The cis/trans nomenclature cannot be used when there are 3 or 4 different ligands connected to the double bond. In this case it is necessary to assign the Cahn-Ingold-Prelog priorities and compare the groups of highest priority for each atom. If the two ligands lie on the same side, "Z" (zusammen=together) is assigned; if they are on opposite sides, "E" (entgegen=opposite) is assigned. 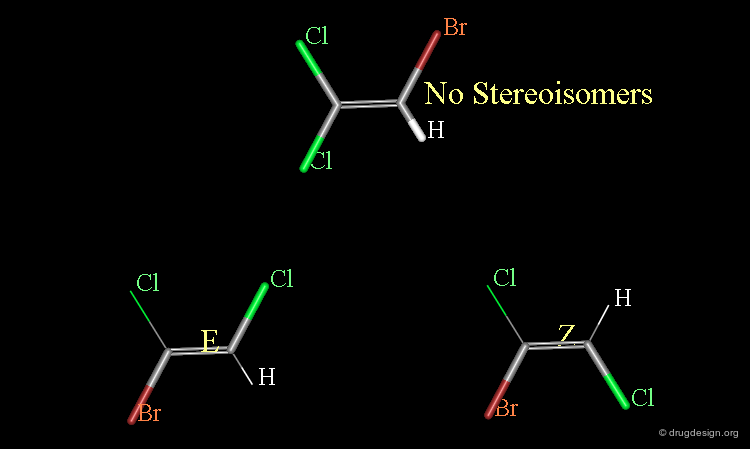 A n-membered ring with n-3 double bonds is planar. The most common descriptors of non-planar geometries of rings are chair, boat, twist-boat and crown.

The "chair" conformation of cyclohexane corresponds to a geometry where four atoms (1,2,4,5) are in a plane and two atoms (3,6) lie on opposite sides of this plane.

The "boat' conformation of cyclohexane corresponds to a geometry where four atoms (1,2,4,5) are in a plane and two atoms (3,6) lie on the same side of this plane.

The "twist-boat" conformation of cyclohexane corresponds to a slightly distorted boat conformation (atoms 1,2,4,5 are no longer in a plane).

The crown conformation of a ring having an even number of atoms (8 or more) is defined by the regular alternation of the signs of its torsion angles. It is analogous to the chair conformation of cyclohexane.

In a "chair" conformation, the substituents are 'axial' or 'equatorial' depending if their orientation is perpendicular or parallel to the mean plane of the molecule.

The following molecule has a C3 symmetry axis, which means that the structure remains the same after rotations of 120o.

1,2-dibromo-1,2-dichloroethane has a center of symmetry in the middle of the carbon-carbon bond.

The rotatory reflection symmetry Sn operation (where n is an even number) corresponds to a rotation of 360o/n followed by a reflection plane that is perpendicular to this axis. The following molecule has a S4 symmetry (90o). 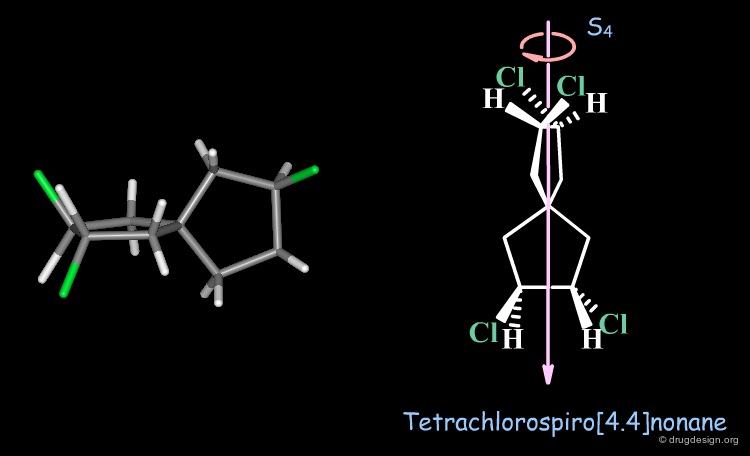