Conformational analysis is a framework that integrates the information on molecular geometries and energies. Minimization treatments are presented and discussed. 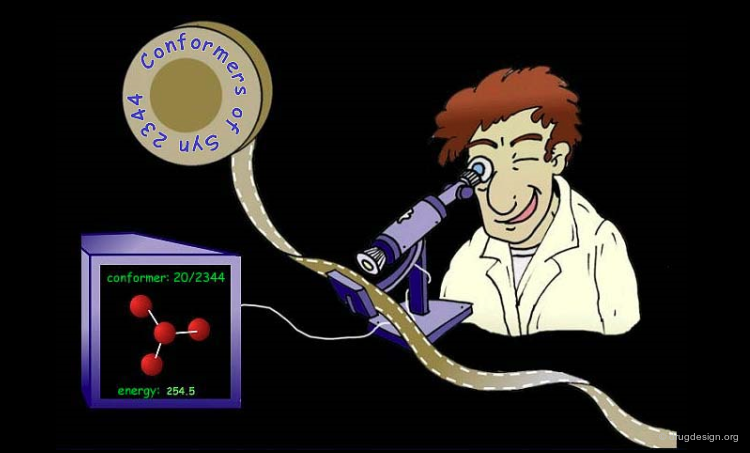 The description of the energy of a molecule in the multidimensional space of its degrees of freedom defines the "conformational potential surface" of the compound. This global representation is extremely useful in understanding, assessing, controlling and eventually influencing the properties of a given molecule. 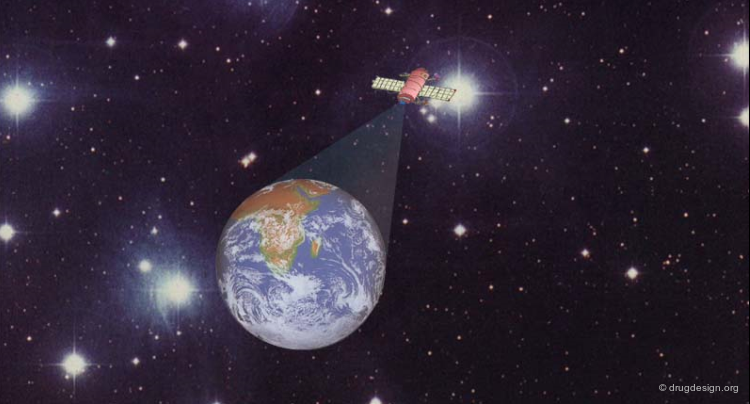 Molecules can change their geometries by processes involving changes in torsion angles. The study of these geometries and their associated energies is called "conformational analysis". 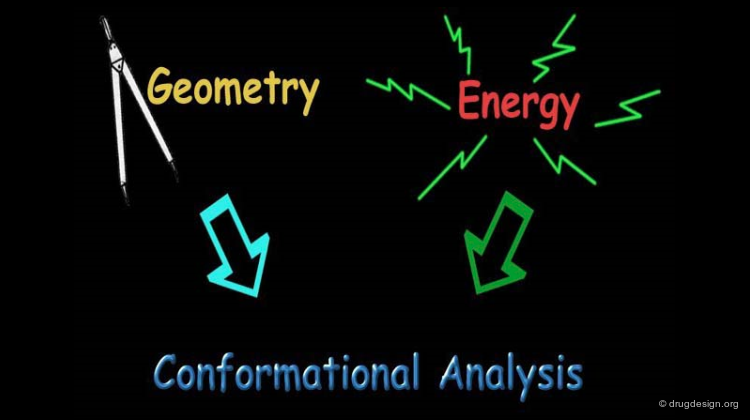 In the case of a molecule with one rotatable bond, the "conformational potential surface" consists of the curve representing the molecular energy as a function of the torsion angle. The minima of the curve correspond to low energy conformations. 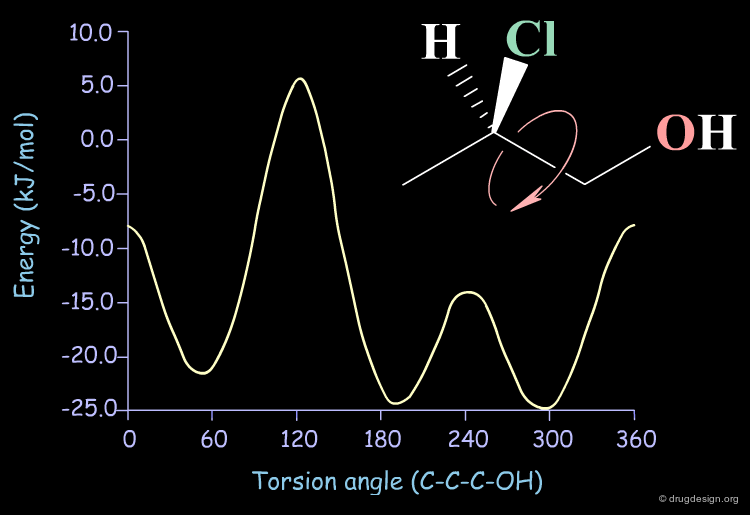 In the case of a molecule with two rotatable bonds, the total energy is represented (Energy axis) as a function of the two variable torsion angles (Torsion 1 and Torsion 2 axis). 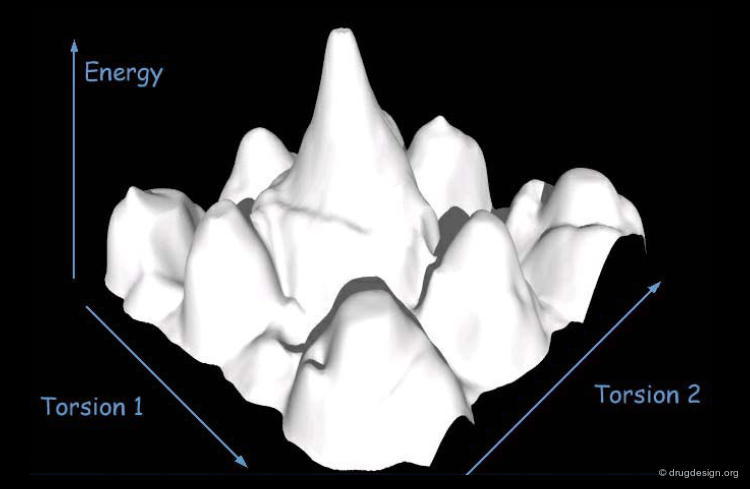 Energy Profile Viewed from the Top¶

This picture represents the same energy profile viewed from the top. 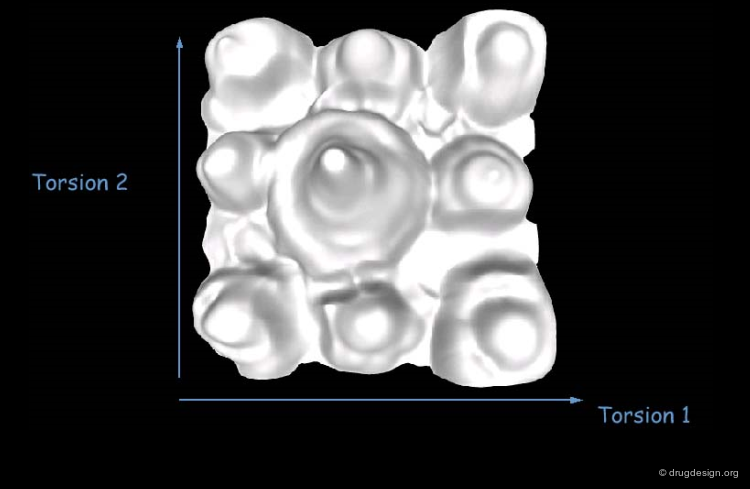 The previous representation can also be visualized with contour lines drawn by computers and connecting together all points with the same value of the energy. The energy levels are color-coded. 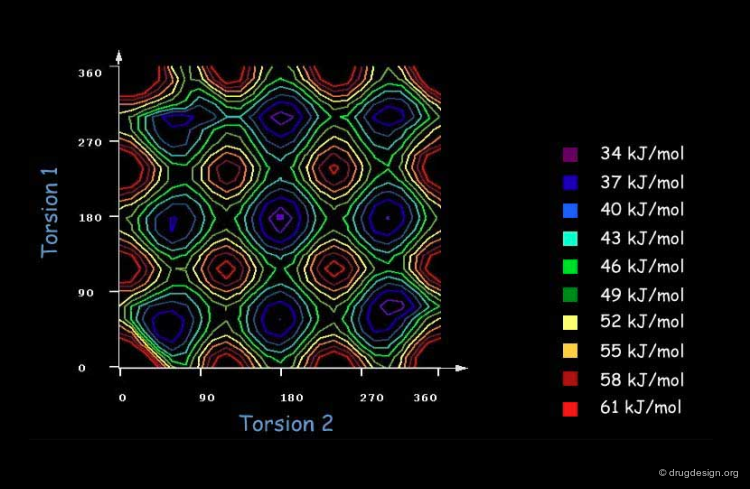 Most molecules have more than two variable torsion angles. Therefore their conformational potential surface cannot be visualized because the surface is defined in a space of more than 3 dimensions. This surface can be represented schematically as a curve displaying the energy as a function of a parameter (p) that has no real geometrical meaning. 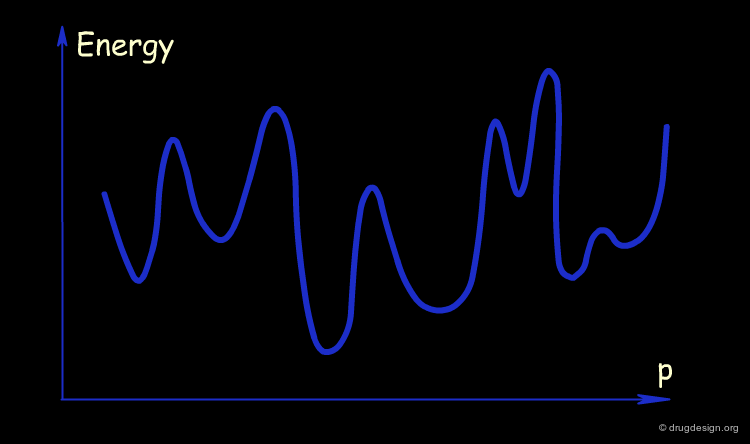 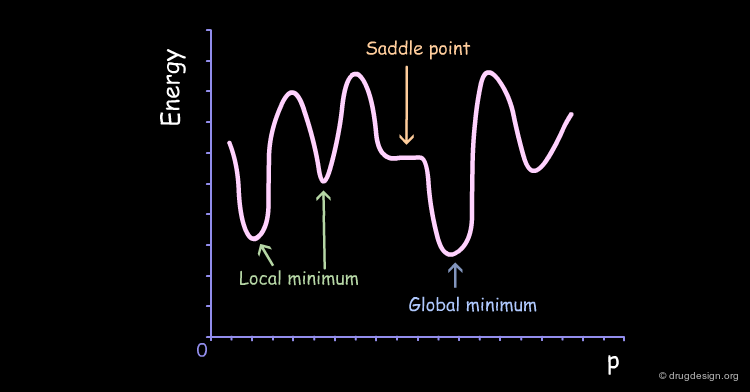 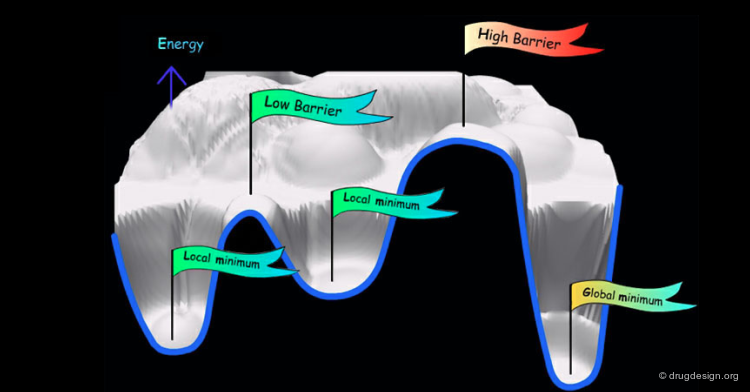 Conformational minimas are separated by transition states. The interconversion from one conformer to the other requires the crossing of the energy barrier. A low barrier corresponds to rapid interconversion rates. For example for a barrier of about 40 kJ/mol the conversion occurs one million times per second.

The interconversion always proceeds along the pathway of lowest energy. If there is a pathway requiring the crossing of a barrier of less than 80 kJ/mol, it will occur at room temperature. 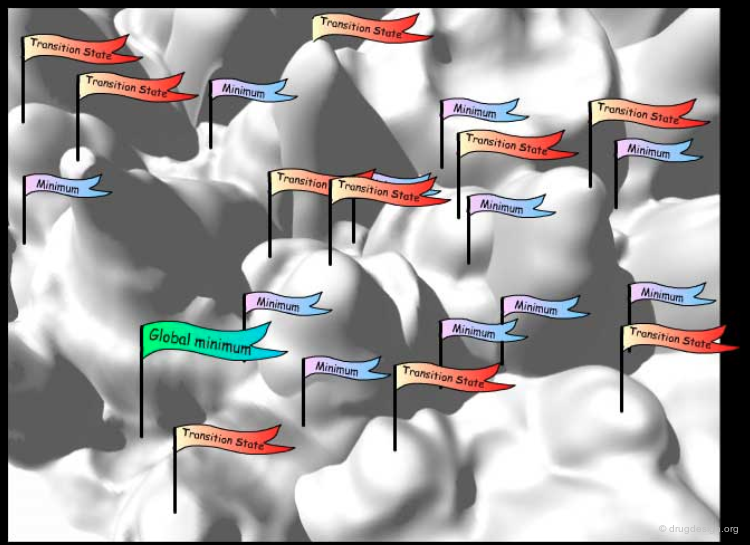 Systematic Scanning of All Potential Surfaces¶

However the systematic search becomes rapidly impractical. For example, the following molecule has 7 rotatable bonds and one non-planar ring. If we consider a 10° resolution for each rotatable bond (36 conformers per bond) and 4 conformations for the piperazine ring, the numbers of conformers to generate is: 36x36x36x36x36x36x36x4 which correspond to 300 billion conformers. This is unfeasible and impractical. 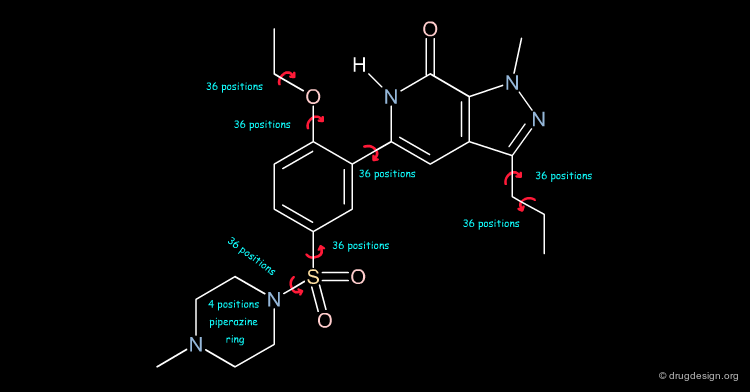 How to Reduce Conformational Search?¶

The comprehensive scanning of the surface becomes rapidly impractical; one has to find ways to reduce the number of points. In fact all the geometries inside a given well correspond to a same family of conformers. Therefore, one conformation will be sufficient for representing the entire family. At this point the conformational analysis is reduced to the identification of all the families of conformers for the molecule concerned.

One Conformer Represents a Whole Family¶

The geometrical differences within a given family are in the amplitude and numerical values of the torsion angles; however from the qualitative point of view they are all the same.

Working with a Set of Representative Conformers¶

With a resolution of 10° the conformers of n-butane will be represented by 36 geometries. However they can be reduced to a much smaller set represented by the local minima. In this case we can select the following three equilibrium geometries: the gauche (+), gauche (-) and the anti, and not 36 positions. 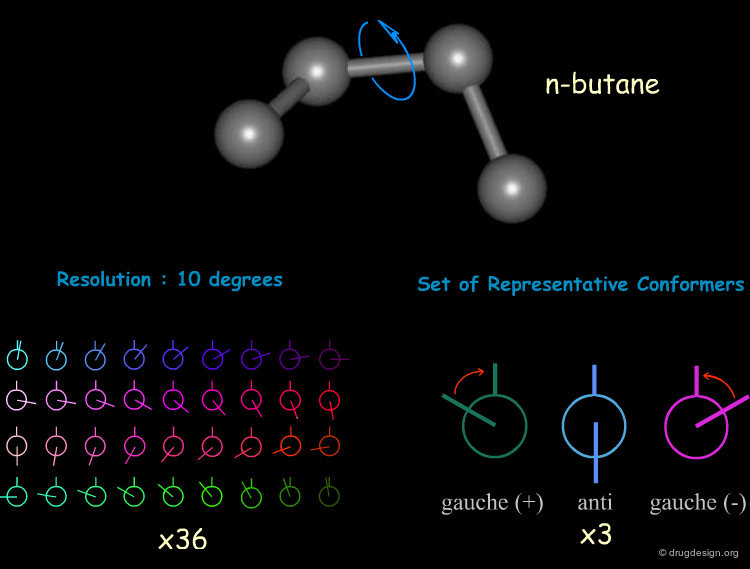 With such a rule, all the "typically different" conformers of the molecule are represented. In the example presented here, instead of studying hundred billions of forms, we now have only to study 8748 (3x3x3x3x3x3x3x4=8748) conformers. 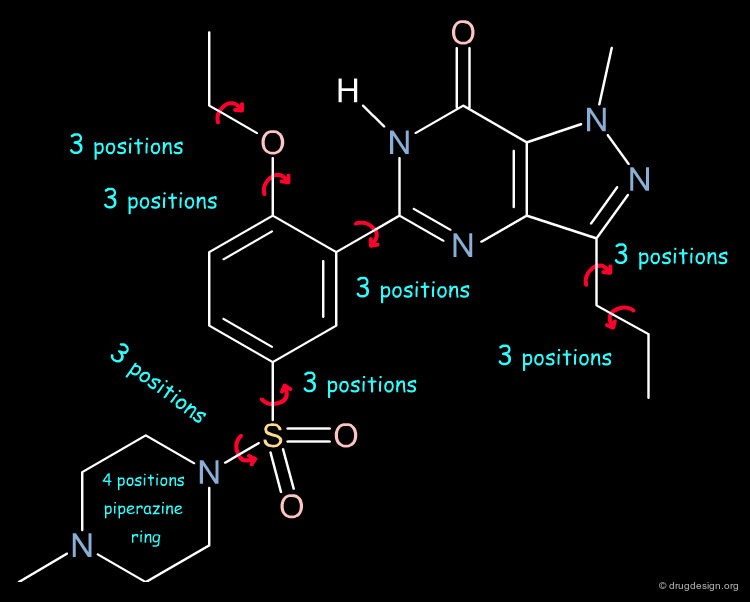 Select a given ring size and select the bond multiplicity scheme you want for the ring (i.e. single or double bonds). The conformations associated to the system you have chosen appear both in 2D (with the signs of the torsion angles) and in 3D.

Describe the nature of the central bond atoms and their hybridization. Newman representations appear and are clickable.

In drug design applications, the minima and their relative energies are of central importance. The representative forms that are generated correspond to theoretical forms and they are not necessarily at the minimum of their corresponding well. Their energies are meaningless. In order to have meaningful values, one has to relax their geometries to find the point of minimum energy; this treatment is called "minimization".

Let us visualize the analysis of methyl-cyclohexene-1-ketone. The carbonyl of the keto group can be either s-trans or s-cis relative to the double bond of the ring. The cyclohexene ring can adopt 4 different conformations (2 chairs and 2 boats). 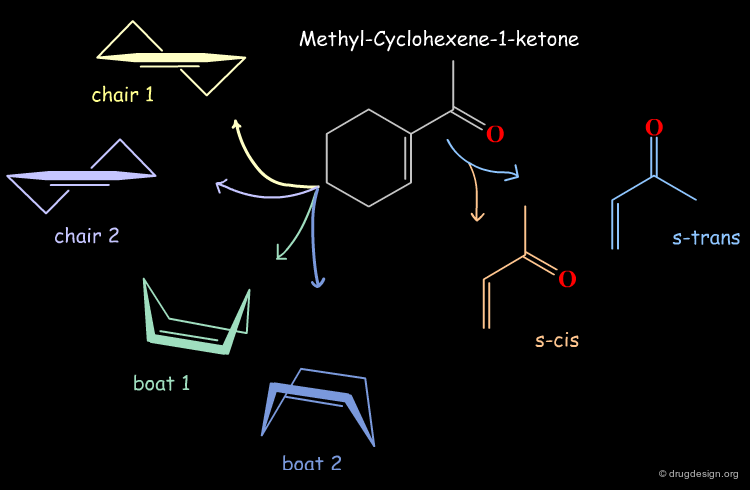 The representative geometries of the molecule can be represented by a set of 2x4 = 8 typically different conformers.

The forms were all minimized and the following relative energies were obtained:

In the great majority of molecules, it is not possible to systematically generate all their conformers. One has to consider a method that produces typically different conformers. They can be generated either by the analysis of their fragments or by random methods (e.g. Monte Carlo). Minimizations procedures then have to be considered for meaningful energy values.

Definition of the Minimization of a Conformer¶

Minimization treatment consists of successive alterations of the geometry of the molecule until a minimum is found on the conformational potential surface. The minimization is terminated when it is not possible to find a conformer of lower energy in the current well considered.

A non-minimized conformer may be used for rough geometrical analyses but not for energy considerations. A minimized structure is a good model for both the geometry and the energy.

In energy minimization an initial conformation is submitted to full geometry optimization, where all parameters defining the geometry of the system are modified by small increments, until the total energy of the system reaches a minimum.

Small modifications of the molecular geometry are considered, if the resulting geometry has a lower energy than the original, then another step is made in the same direction. Otherwise a smaller step in a different direction is carried out. The process is continued until the energy cannot decrease.

There are different algorithms for conducting a minimization. For example, for the steepest descent, the conjugated gradients or Newton-Raphson procedures require the calculation of the first or second derivatives of the energy all along the iterative process.

Bond lengths, bond angles and torsion angles are the variables of the minimization process. The total energy of the following molecule is a function of 132 variables. 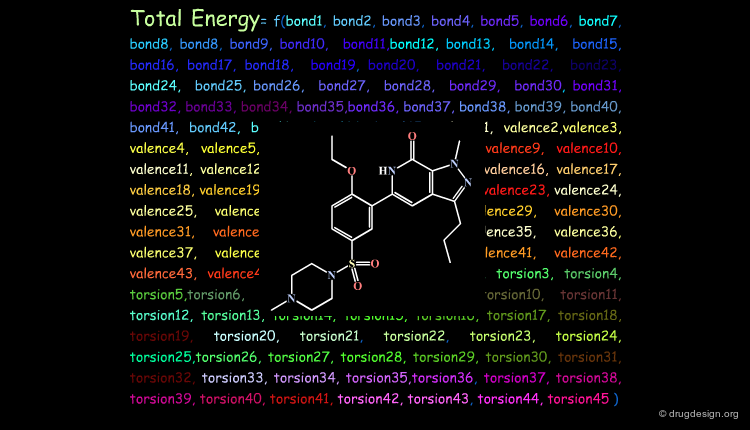 Minimization is a Time-Consuming Treatment¶

The stretching energy of the starting geometry is extremely high. Press the START button to initiate the minimization process and note the variation of each of the elementary contributions (e.g. stretching, bending, van der Waals) until the lowest energy conformation is reached. 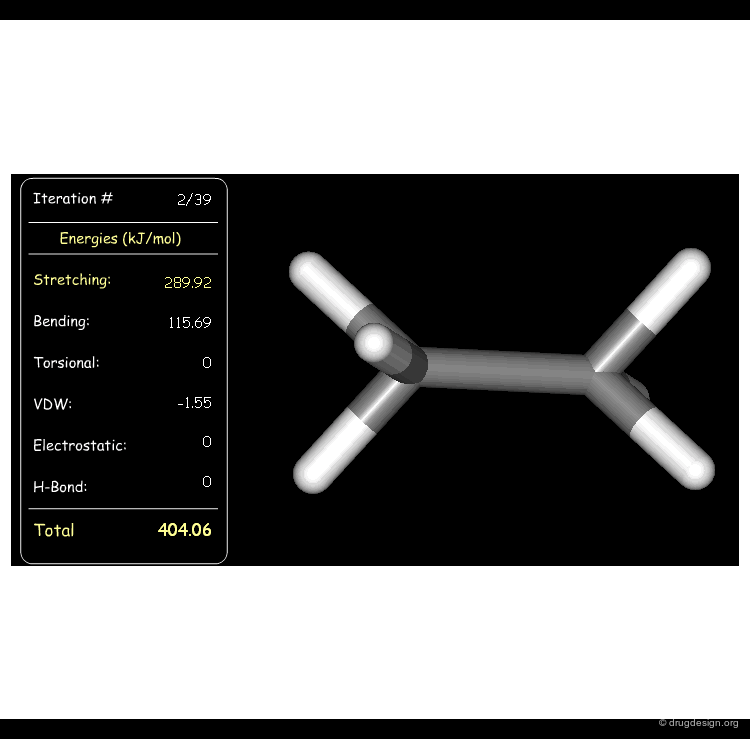 Stretching, bending, and van der Waals energies of the starting geometry are high. Press the START button to initiate the minimization process and note their variation until the lowest energy conformation is reached.

Torsional and van der Waals energies of the starting geometry are high. Press the START button to initiate the minimization process and note their variation until the lowest energy conformation is reached.

In their initial relative orientations the van der Waals interactions between the two molecules are not optimal. Press the START button to view how the minimization of the entire system achieves better interactions with shorter distances and finally finds the minimum energy.

The electrostatic component of the starting conformer is small and at the end of the minimization, it turns negative (attractions).

Press the START button to view how the minimization process optimizes a favorable intramolecular hydrogen bond.

The following example illustrates a case where the strain energy of the starting conformer is high due to severe van der Waals repulsions and can be reduced only with substantial deformations of other components including torsional, stretching and bending energies. In the final minimized conformer, the forces acting on the atoms are all balanced. 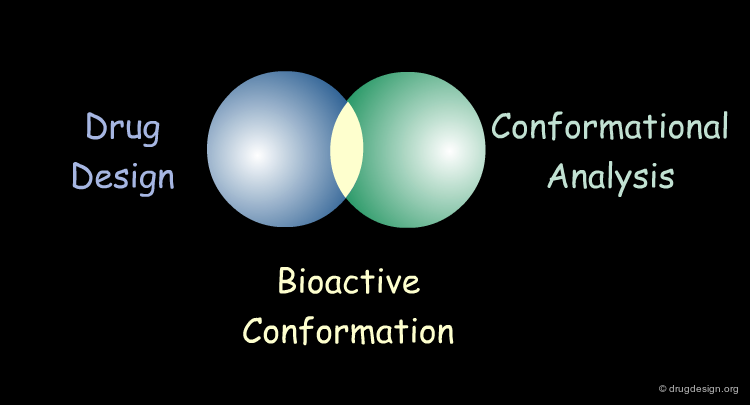 Energy of the Bioactive Form¶

In order to be able to assess the population of the bioactive form, it is necessary to know the energy of the global minimum of the molecule concerned. This requires conformational analysis studies. 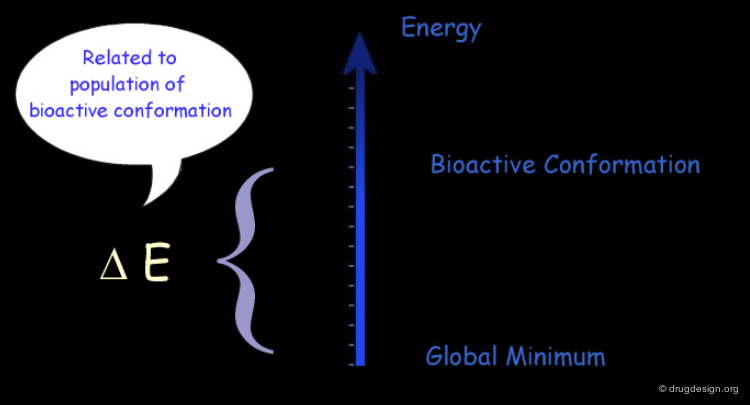 Low Energy of the Bioactive Conformation¶

The difference of energy between the bioactive conformation and the conformation found in the crystal is generally less than 13 kJ/mol; this can be understood in the framework of the "induced-fit" theory.

Geometry of the Bioactive Conformation¶ 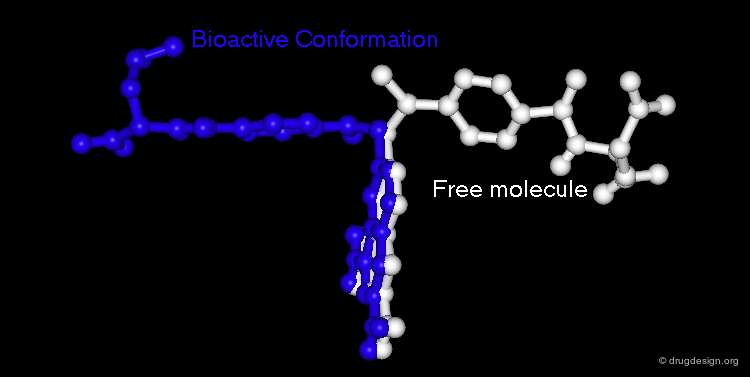 A good molecular modeler can intelligently save time-consuming treatments. He can judge, assess, and estimate using the 3D manipulation of a mechanical molecular model until he feels that a calculation is needed. For example, an experienced modeler can easily guess the geometry of the global minimum of a molecule and possibly minimize 5-10 different candidate geometries instead of the thousands that would be needed in a fully computerized study. He will use the computerized treatments for clarifying features that are beyond the things he knows.

Common Errors Made with Minimization¶

Among the common errors that are observed in the use of molecular modeling systems is the belief that a minimized conformer has a "quality label" of validity. This is not true. The minimum obtained depends on the initial conformation that has been used. Although 'improved' by the minimization treatment, this is not sufficient. What is important is the location of this conformation with respect to the low energy minima, including the global minimum of the molecule.

This is an example of a minimized molecule corresponding to an input conformation introduced by the modeler. The problem is that the "cis" conformation of an acyclic ester is almost inexistent; the "trans" form is by far the preferred one. The population of this conformation visualized here is close to 0%. The same can also be said for amide bonds.

Molecular dynamics provide an alternative approach to determine the preferred conformers and the global minimum of a molecule. This is achieved by the simulation of the dynamical motions of the molecule as it vibrates and undergoes internal rotation.

Molecular dynamics is an extension of the molecular mechanics approach and based on the idea that the atoms of the molecule feel forces and want to move. Each atom is treated as a particle responding to Newton's equations of motion. Integration of these equations with successive time steps lead to the trajectory of the atoms over time in the form of a list of positions and velocities. 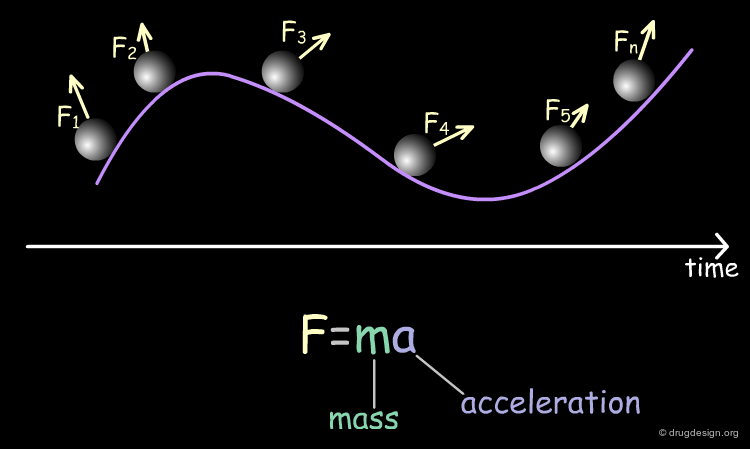 Molecular dynamic simulations can be used to obtain low energy conformers. The simulations can run with differing temperatures to obtain different families of conformers. At higher temperatures, more conformers are possible and it becomes feasible to cross energy barriers. Current methodology and computer capabilities do not allow the sampling of the conformational space of large molecules.

Simulated annealing is a technique where the molecule is heated and then cooled very slowly so that conformational changes occurring will be at a local minimum. This process is generally repeated many times until several very closely related and low energy conformations are obtained. The conformer of lowest energy is assumed to be global minimum.

The motions of the atoms and chemical groups obtained by molecular dynamics simulation reveal subtle underlying molecular machinery. In the beginning of the simulation, the motions are frequently interrupted by collisions with neighboring groups and each group seems to have an erratic trajectory. However, over longer periods of time, coherent and collective motions start to develop, revealing how some groups can fluctuate somewhat more than others.

Typically one can generate about 100 conformations and minimize them with molecular mechanics. The minimized forms are used as starting points for dynamics simulation varying the time and temperature. For each starting point, a number of steps of dynamics at 1 femtosecond intervals are made; the coordinates and energy of each point are recorded. The conformation representing every picosecond steps is saved, and finally, at the end of the study, the atoms' trajectories can be displayed as a movie by quickly displaying the sequence of individual frames. Throughout the treatments, conformers with low energies are saved (coordinates and energies). 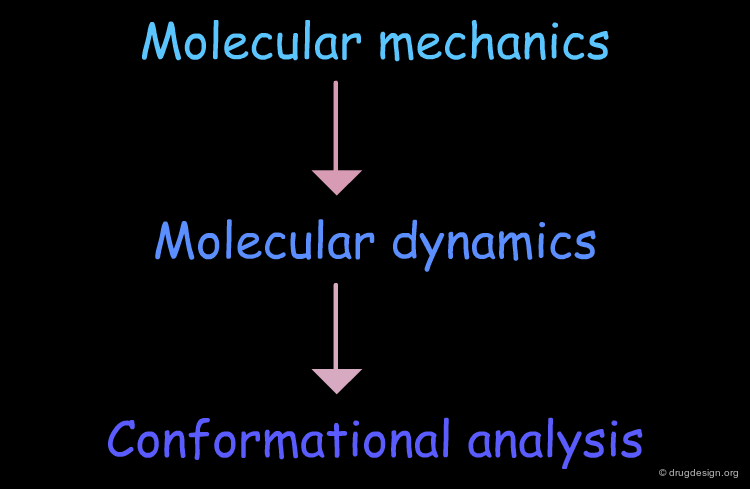